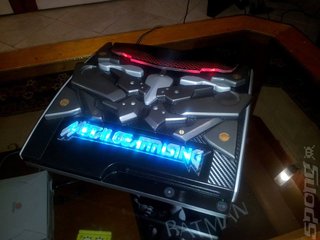 All Images (7) »
Sony has always had this knack of issuing customised PlayStation consoles. And at this year's E3, the company showcased a number of PS3 consoles that had been cased to detail a selection of popular third-party titles. And they look boss.

One of the men commissioned to make these custom cases was Javier Riquelme, who shared a number of photos over the weekend detailing his creations. They cover Borderlands, Assassin's Creed III, BioShock Infinite, Bungie's studio logo and Call of Duty: Black Ops II among others.

With Sony aggressively seeking partnerships with developers to get them embracing the upcoming PlayStation 4 hardware, it's nice to see the company buttering up AAA publishers and developers as much as they are indie talent. Take a look at them all through the gallery - hit up Javier's Facebook Page here.
Companies: Sony
Games: Assassin's Creed III BioShock: Infinite Borderlands 2 Call of Duty: Black Ops II