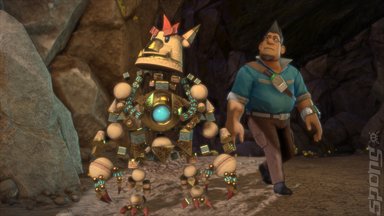 Want to see some more of Knack, the PS4 character platformer that legendary developer Mark Cerny (Crash Bandicoot, Spyro the Dragon) is currently working on? Well, it just so happens that you can now watch a lengthy video of gameplay. How about that?

Sony has released the video as part of its E3 coverage on YouTube, with this highlight on the colourful launch title including an interview with Cerny and the game's producer Yusuke Watanabe. You get an idea of how Katamari Damacy, God of War and Crash Bandicoot inspired Knack in some way, as well as some of the social features baked into the game.

What do you think? Let us know in the comments box below.