South Park: The Stick of Truth Trailer Drops Ahead of E3 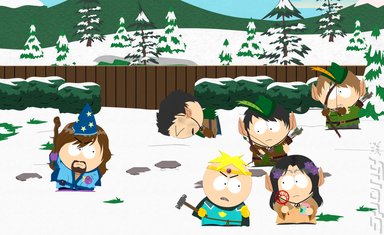 Ubisoft has released its E3 trailer for South Park: The Stick of Truth a week ahead of official proceedings in Los Angeles. It's the first we've seen of the game since the French publisher acquired the rights to the game from THQ earlier this year.

It's being developed by Obsidian, with South Park Studios having a heavy hand in its creation (something of a first for a game tie-in involving the franchise... let's pretend Scott Tenorman XBLA never happened). It's a role-playing game in which you play as 'the new kid' that gets involved in a pretend fantasy adventure with Stan, Kyle, Kenny and Cartman.

The game's being released later this year - Ubisoft is probably holding off from announcing a firm date until its E3 conference next week.