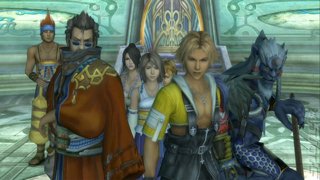 We all know that [i]Final Fantasy X/X-2 HD will finally be seeing a release in 2013. When exactly in 2013 is anyone's guess, but at least we have a year to hold on to now. Square Enix has published a teaser trailer to celebrate this particular announcement milestone.[/i]

As revealed last week, the remasters will see slightly different releases on PlayStation 3 and Vita. The console version will contain both Final Fantasy X and Final Fantasy X-2 on the same Blu-ray disc, while the handheld edition will be sold separately.

In a press release, series producer Yoshinori Kitase said, "These games are classic fan-favorites, and we hope that new and old Final Fantasy fans can experience the world of Spira and the story of Tidus and Yuna in a brand-new light with these remastered editions." Gotta love 'im. Watch a trailer below.