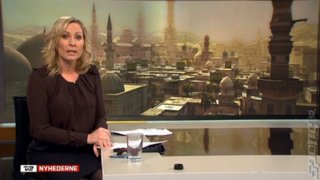 Whoops! A Danish TV station has apologised for accidentally using a screenshot from Assassin's Creed to illustrate a news report about Syria.

Head of TV2 Jacob Nybroe said that the image, used as a backdrop behind news anchor Cecile Beck on February 26, was thought by an employee to be a photo of Damascus' skyline. Nybroe added that he learned of the mistake following speculation on social media websites.

The exec said that it was a terrible mistake and a ?reminder to us all of the importance of verifying the sources of pictures.? Guess we can't complain too much about the graphical fidelity of computer games anymore!

Via The Times of Israel
Companies: Ubisoft
Games: Assassin's Creed