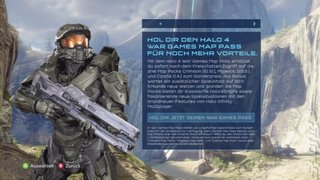 Heads up - if a leak on Microsoft's German Xbox 360 dashboard rings true, Halo 4 players may be getting their first DLC map pack very soon. An advert for Halo 4 on the dashboard reveals, when translated, that the Crimson Map Pack will be arriving on December 10.

The game will also be getting two more map packs over the next couple of months, with a 'Majestic Map Pack' due on February 25 and a 'Castle Map Pack' launching on April 1. All of the packs can be purchased separately, but will also be included in the Halo 4 War Games Pass too (2000 Microsoft Points).

Microsoft won't say anything about the leak, but we'll know for sure if the company holds to its dates by early December.