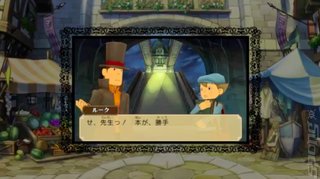 All Images (2) »
Professor Layton VS Ace Attorney. I want it. You want it. Everyone wants it. Don't act like you don't want it. You're lying to yourself. Anyway, the Capcom and Level-5 3DS crossover is being released in Japan on November 29, so it's about time we saw another trailer for the game, right?

Of course it is. And while it's possible that you can't read Japanese (like us), it's clear to see that gameplay mechanics showcased will no doubt excite fans of both Layton and Phoenix Wright.

A medieval metropolis called Labyrinth City is home to a mysterious villain who can make drawn objects a reality thanks to the use of a magic pen. While Layton is tasked with solving puzzles to uncover the culprit, Phoenix ends up in court defending a person accused of witchcraft.

Watch the trailer below.