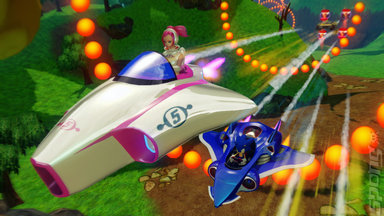 Sumo Digital knows better than to ask SEGA fans for their input on DLC characters for Sonic & All-Stars Racing: Transformed! But executive producer Steve "S0L" Lycett went and did it anyway, (likely) fully aware that the internet would be inundated with petitions to include all kinds of under-appreciated heroes.

The developer issued a challenge to fans wanting to have a say in which SEGA characters get developed as DLC content: form a petition online, get a minimum of 1000 votes and present the petition to Lycett before December 1. Three successful petitions will be considered for inclusion, at Sumo Digital's discretion.

As you would expect, the internet has blown up in response, with petitions appearing for a range of different characters; Shade the Echidna from Sonic Chronicles, Selvaria Bles from Valkyria Chronicles, Vectorman, Segata Sanshiro... even Japan-only Vocaloid superstar Hatsune Miku is being suggested.