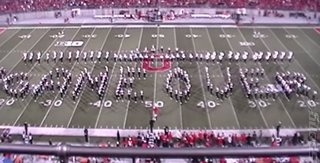 You've never seen a half-time performance quite like this one. The Ohio State University Marching Band pulled off an amazing ten-minute show during a game against Nebraska on Saturday - dedicated to video games.

The Legend of Zelda, Pokémon, Halo, Super Mario and PacMan were among the games referenced in people form. With every logo or icon formed, the marching band was met with a roaring applause from the audience. And rightly so too - check out the Epona at around the six minute mark!

This really has to be seen to be believed - grab a cuppa and let your mind be blown. Thanks to everyone who sent this video our way!