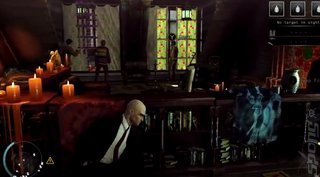 Good old Agent 47, much like Jason Statham the actor who was destined to take the role but due to conspiracy and a requirement for so-called 'being able to actually act' didn't, he's ploughing this familiar furrow. Only not so much, he's now got his own new online mode in 'Contract'.

As you'll no doubt be aware, this "new online mode allows gamers to create and share their own custom hit challenges in the game." Well screw us waffling about it, watch the gosh-darned video whydoncha? It's below... unlike Jason Statham who is probably jacking motors, cutting slags and saving babes from furners.