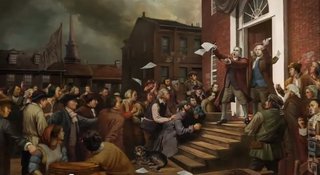 The American Revolution - when brave revolutionaries stood up against the evil empire of King George the Vader of Hut and threw his tea into a hole in Boston harbour to be eaten by the monstrous rancor or something like that. The following video trailer thingie from Ubisoft for Assassin's Creed 3 seeks to provide a greater understanding of the Boston Tea Party.

Ubisoft says that the (admittedly good) video will provide, " a deeper understanding of the event that started the revolution and the birth of a nation -- the Boston Tea Party."

It won't. Sure, it's great to look at - and we're looking forward to the game loads, but, well, the video won't give you a deeper understanding.

"The year was 1773. The American colonies were under British rule and growing restless of the empire's enforced laws and taxes. In an act of solidarity, the American colonists took a final stand and in one of the most famous moments in history, destroyed British imports, boycotting their taxes and halting their tyrannical momentum."

Nah, didn't happen like that. Where was the evil emperor in all this? We prefer our version of history. So should you. Watch the video.