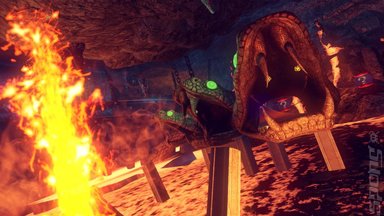 All Images (22) »
Sonic & SEGA All-Stars Racing surprised a whole heap of SEGA and Sonic fans back in 2010, by being a spinoff game that was actually pretty good! So it's no surprise that there's a lot of interest in the upcoming sequel, Sonic & All-Stars Racing Transformed, which sees the blue blur and friends zoom about in cars, boats and planes.

Just for you, we've managed to collect some fresh screenshots of the racer in action, straight from the Penny Arcade Expo. These images mostly showcase a new lava-based stage, inspired by the Golden Axe series - you can read our latest preview from Gamescom to learn more about that particular track.

There's a smattering of other screenshots from other, equally colourful stages in the game too. Just click the image (or the 'All Images' link) to open the gallery.
Companies: SEGA
Games: Sonic & All-Stars Racing Transformed