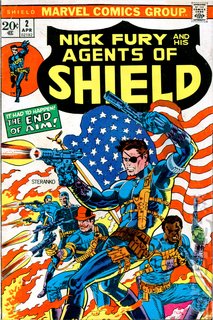 Could it be THIS awesome?
The Marvel TV show Joss Whedon is attached to has been outed as S.H.I.E.L.D. ABC, a fellow member of the Disney family, has bought a pilot. Whedon is co-writing alongside his brother Jed Whedon and Maurissa Tancharoen of Dollhouse.

Schedule permitting Whedon will also direct the pilot and, should the show go ahead, is set to executive produce the series.

S.H.I.E.L.D. is the peacekeeping organisation tasked with keeping the Marvel Universe safe, with particular reference to super-powered types. It's headed up by Nick Fury, played by Samuel L. Jackson in the Marvel films, but there's no word on how much we'll see of him in the TV show.

We present all of the above in a tone of high-pitched, slightly deranged excitement.