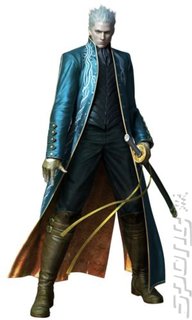 Capcom is currently updating the world on its upcoming high-profile games at its Gamescom conference right now - and has just announced that Vergil will be making an appearance in the DmC reboot.

Ninja Theory has been working on a revamp of the hack and slash series for some time now, and has been keen to alter main character Dante into a more modern image. Because of the changes, it was not certain if the studio would add the protagonist's older brother to the mix.

The detail was revealed alongside some gameplay footage of a new boss fight, where Dante had to hack into the Raptor News Network and destroy the channel's lead anchor. Cue digital floating heads and curious battle sequences.