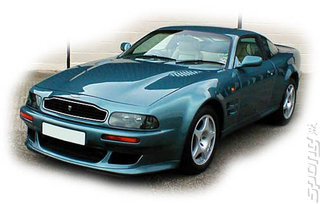 The July car park is out for Forza 4 for a much-less than the Porsche pack was, in fact it'll cost you 560 Microsoft Points for 10 cars. Details of the motors are below:

· 2011 McLaren 59 McLaren GT MP4-12C GT3 -- The MP4-12C GT3 is the race version of the latest McLaren supercar, and it takes no prisoners on the track. The 12C GT3 is designed to allow any driver to reach the cars performance limit. In conjunction with CRS Racing, development has been pursued with the level of detail equal to that of an F1 car.

· 1973 AMC Gremlin X -- Described by AMC as ?the first American-built import,? and based on a sketch by AMC?s chief stylist, the AMC Gremlin was a two-fold response to Japanese imports and the fuel crisis, and a classic of 1970s style.

· 1998 Aston Martin V8 Vantage V600 -- Take a luxury sportscar and then squeeze even more horsepower out of an already chest-pounding motor. That?s what Aston Martin did with the super-low production Vantage V600. Only 56 cars were built with this option package; not surprising, since only a select few can afford the V600?s stunning combination of power and luxury.

· 1954 Jaguar XK120 -- The XK120 is not just slick sophistication; it also delivered refined performance and an exhilarating ride. With its curvy body and an engine capable of 210 hp, the XK120 is all dangerous curves and road-hugging performance.

· 1956 Lotus Eleven -- The Lotus Eleven was successful on the track and was piloted by drivers such as the great Stirling Moss. To this day, there are few cars that can match its beauty or feather-light package.

· 2012 Mercedes-Benz SLK55 AMG -- Whenever a Mercedes-Benz model gets the AMG treatment, you can expect slick refinement and a serious power boost. The SLK 55 is no exception. Dropping in a 5.5-liter V8 with 415 hp and 376 ft-lbs of torque is just the beginning. The SLK55 AMG is a dressy competitor in its class, with enough option packages to serve those in search of lavish luxury and pure thrills.

· 1995 RUF CTR2 -- Following the release of the new 993-chassis, Alois Ruf went to work building a new CTR that would once again sit in the upper echelons of automotive performance. To prove the car?s dominance, Ruf entered two CTR2s in the legendary Pike?s Peak Hill Climb. They were both street legal and placed second and fourth, setting the overall top qualifying time with ease.

· 2012 Spyker C8 Aileron -- After the demise of the Le Mans GT1 class, Spyker has focused its efforts on developing a car for the new GTE class. What they have produced in the C8 Aileron is an off-the-shelf race car that is ready to go head-to-head with the top competition.