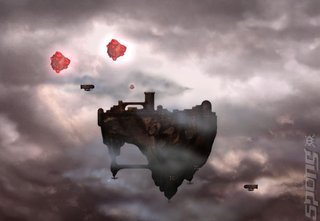 Pre-E3 often leads to an information lock-down (well, more than usual) in video gaming news. So, it's time for a cannibalisng press (e.g. our good selves and, in this case VG247 bless 'em) so reference itself regarding Sony's E3 announcements.

Yes, pre-Sony traditional E3 "Oh shit, we leaked our biggest piece of gaming news!!! Again!!!" VG247's Patrick Garrett ran a fascinating piece of analysis of what to expect from the forthcoming show. In it he postulates:

"You may well be blown away by what?s on show, but it?s doubtful you?re going to be too shocked by any of the announcements. Apart from the partnership deal between PlayStation and a leading cloud gaming service, obviously."

This was picked up by CVG with, "OnLive or Gaikai deal said to enable streamed games on PlayStation hardware".

The original source of VG247 also had, "Rumour: Sony to enter into cloud gaming deal at E3" that was fleshed out as "VG247 has learned that Sony is to announce a cloud gaming deal with either Gaikai or OnLive at E3, apparently allowing streamed games on PlayStation hardware", so we're not sure if that's a rumour or a learning. But the story refers to the original piece of analytical speculation.

It's very confusing and it's not even the specialist press that is reporting or rumouring. Tom's Guide runs with, "Sony is expected to announce a deal with OnLive or Gaikai during its E3 press conference on June 4," and yes, it uses Pat Garrett's piece as its reference.

But it reports a tweet from Ross McGrath, SCEE PlayStation Plus Content Manager, who should be selling up PlayStation Plus given his freaking job title. However, TG states that McGrath, "hinted earlier this week that the service may require PlayStation Plus. 'If you don't have a PS+ subscription, now is the time to get one. For real. Just get 3 months if you aren't sure. Trust me'. Exactly how that's a hint to a Cloud Gaming partnership with PS3 we're not sure.

But it certainly doesn't match Electric Pig's, "Sources close to Sony have revealed that the company is inking a deal with 'a leading cloud gaming service,' which is a deal that?ll be unveiled at E3. When you start to connect the dots, this is pretty exciting stuff" for bravado.

But Metro tops it all off, once again using Pat's piece but this time stating, "The big announcement at Sony's pre-E3 conference is of a deal with a major cloud gaming company, according to the latest rumours. With either Gaikai or OnLive thought to be involved." Yes, the big announcement "is" not even a 'might be'.

Now, before we ride off to the top of some mythical moral high ground on our equally high horse, we don't know if the original report is true or false. It is a day of pre-E3 sunshine and news-lock-down, and we've just reported on reports. Still, it's fun to see how the world works.
Companies: Sony