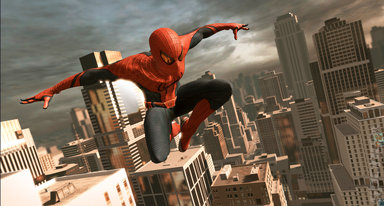 Activision has put out a video for the upcoming Amazing Spider-Man game-of-the-film-of-the-comic, featuring a new made up* superpower for the webbed wonder.

It's called 'web rush', and it's not all that clear what it actually does. Part detective vision from Batman: Arkham Asylum, part bullet time, it seems to allow the wallcrawler to slow down time and make better tactical decisions. British writer Paul Jenkins once wrote a Spider-Man comic in which Spidey stated that the reason he can make all his awesomely hilarious one-liners in the middle of fights is that his spider-sense speeds up his perception. So, maybe developer Beenox should have just called this 'spider-sense'. But, y'know, whatever...

*Before some bright spark says it in the comments: 'unlike all those other real superpowers he's got'.
Companies: Activision Beenox
Games: The Amazing Spider-Man