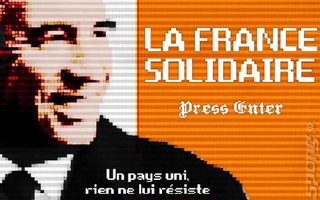 Think politics is all about boring old farts waffling on about things you don't really give a toss about? You're gonna wish you lived in France - one of the outside candidates - François Bayrou - in the upcoming presidential election has included an 8-bit campaign video that plays when you enter the Konami code on his website.

You should all know the Konami code by now. No? OK, OK, let's put our Patrick Moore GamesMaster helmet on... one second... "Right, simply push Up, Up, Down, Down, Left, Right, Left, Right, B, A. That should sort you out. Until next time..."

So what happens when you type the code? According to the Telegraph, "a Zelda-style campaign video, complete with an 8-bit music track and the campaign slogan 'un pays uni, rien ne lui resiste' (nothing can resist a united nation). The 'final hour of combat approaches' we are told, and we must rebuild the social contract to save democracy. At the end, the catchline: 'Insert vote to play'."

Magic. Go and see it now.
Games: Legend Of Zelda, The