I Am Alive iOS App Launches 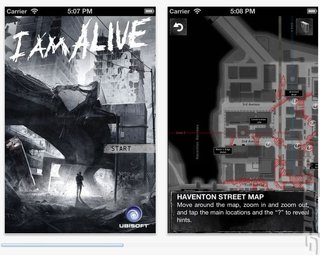 Despite reviews and even the launch trailer for I Am Alive itself being embargoed until 5pm today, we are allowed to tell you that the Companion app is now available on iTunes.

It's free. The app that is. iTunes itself would probably cost you a few Euros to buy outright.

* Street map of the main game area with exclusive hints from the developers
* List of all resources from the game detailing the level of rarity and effects on health, stamina and stamina capacity
* List of all Achievements and Trophies with a check/uncheck tracking feature
* 5 videos including a trailer, a making-of and the 3 ?survivor tapes?
* Over 50 production concept arts, promotional artworks and screenshots
* Never seen before O.S.T., including 6 tracks exclusively composed for the app
* Photo mode that lets you create your own I Am Alive-themed photos and post them to Facebook or email them to friends

The game launches tomorrow on XBLA for 1200 Microsoft Points.

Companies: Ubisoft
Games: I Am Alive