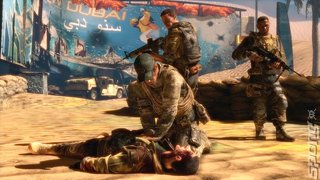 So Spec Ops: The Line has been banned in the United Arab Emirates because the country finds the content within it rather controversial. There is a lot of shooting, and the game is set in Dubai after all. During an interview with developer Yager, we asked senior director Shawn Frison for his thoughts on the subject.

?We would prefer that it wasn?t banned, of course," he said rather diplomatically. "We don?t really portray the city in a particularly negative light. It would be cool if we could get it into people?s hands there - it?s always fun to play through a game that takes place where you?re from.

We also asked him if the studio knew why exactly the game was banned. ?I honestly never got any information on why they decided to ban it. Maybe there is someone, somewhere, that got that memo... but I wasn?t that guy."