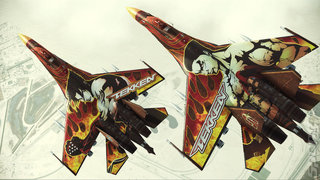 Namco Bandai is going to give a whole new meaning to the term 'fighter jet', with the arrival of Tekken-themed plane skins for the Ace Combat series on the Japanese PlayStation Network and Xbox Live Marketplace.

Costing Ą600 on PS3 and 400 Microsoft Points on Xbox 360, the paint jobs allow you adorn Kazuya Mishima and Jin Kazama on an Su-35 plane. More Tekken tie-ins are planned, according to Namco Bandai, but the publisher is no stranger to this sort of thing, having peppered Ace Combat 6 previously with Idolmaster skins.

The Tekken skins look great and all, but wouldn't it be awesome if you could actually play as Jin and Kazuya within the cockpit? That would be hilarious. What do you reckon?
Companies: Namco Bandai
Games: Ace Combat: Assault Horizon