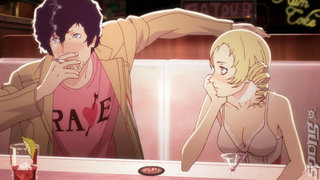 We've covered Catherine a fair bit since its announcement. There's been a lot of excitement for the Persona team's first HD game in Japan too. So much so that it is now the third most-wanted game from readers of Famitsu.

That accolade made director Katsura Hashino shoot Red Bull out of his nose.

Hashino was quick to quells some potential misconceptions about the game that might arise from Catherine's quick rise to popularity, so as not to disappoint anyone. It's not an RPG, and it's not a free-roaming action game, although it is classified as an action-adventure.

"It's a game made with a cinematic (?) fusion of action-puzzle and adventure. This is why if you're not all that good at action games, I think you'll be okay," wrote Hashino.

"It certainly does not have the level of freedom of many of the popular games of today. However, if you're interested in 'a slightly different feeling,' I believe you'll be fulfilled by the unique 'good feeling' that can only be experienced with this game"