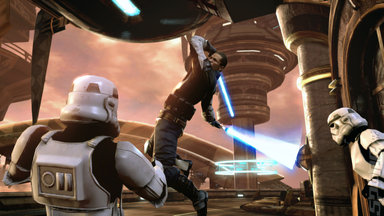 Star Wars: The Force Unleashed II will be getting a demo on October 12th on both Xbox Live and Playstation network... yes, at the same time.

The single demo level is from the start of the game, set in a cloning facility on the planet of Kamino. Starkiller, wound up by Vader about that fact that he's just a clone runs off. Vader, not happy with simply niggling Vader chases him and thus begins a quest. Fortunately, there are also special mind powers and lots of fighting.