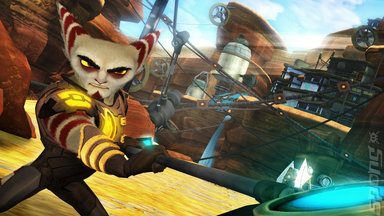 David Kaye, the voice actor behind Resistance's Nathan Hale, and Ratchet and Clank's Clank has let a gaming cat out of an actor's bag.

Asked by Shogungamer about what gaming roles his going to be working on, he says, "Don?t know about Nate. There are some interesting developments always coming from Insomniac games. We?re working on more R & C currently."

Apparently he's not stopping with cute and robotic though, "I?ve just begun working at Warner Brothers Studios and a new and exciting project for the Batman VG franchise. Deets coming soon."

Be amusing if they got those characters mixed up, eh readers.
Games: Ratchet & Clank: A Crack in Time