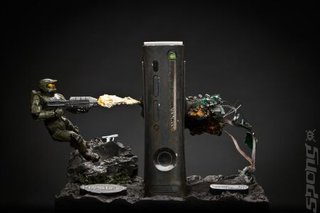 The Xbox 360 has passed the 1 million sales mark in Australia and New Zealand. Huzzah! To celebrate, Microsoft is auctioning off one-of-a-kind consoles in a five-week charity event. It actually kicked off yesterday, but whatever.

The real prize will be the special Halo-themed Weta Workshop Xbox console. You can see it in the picture above. Look at it. It's terrifyingly awesome, isn't it? You know you want it. Hell, we want it. There's also a special 'crystal' console that is decorated with more than 10,000 semi-precious stones. Bling bling.

The proceeds from most of the auctions go to the David Peachey Foundation, which was aims to help prospects for young Aboriginal and Torres Strait Islander people. The final going price of the Halo machine will be matched by Microsoft New Zealand as a donation to local charity Cure Kids.