Doctor Who Producer: Violence in Games is "F*%king Boring" 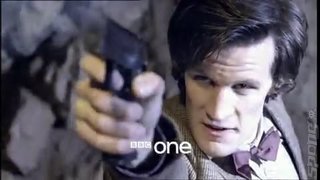 All Images (2) »
Discussing the just-announced Doctor Who: The Adventure Series Steven Moffat, executive producer on both the show and the game, has described violence in games as swearingly dull.

Speaking to Develop, the producer (and senior writer on the TV show) said, "I?m not saying whether it?s right or wrong, but [the violent aspect of games] is just fucking boring. I was playing Halo the other night and I?m more interested in how lovely the world is ? I turn to the easy settings to get through it quicker." In this instance, that's fairly encouraging since the Doctor's far more likely to leg it than shoot someone.

Describing play in the new Who games, Moffat's fellow producer Piers Wenger said "the gameplay here isn?t completely trad or generic ? it?s a puzzle game, there are strategies needed, and it provides the opportunity to engage a gameplayer with a different means of defending himself and moving the game forward. "

And why haven't we been getting Who games sooner? "Well, there should have been one ages ago. It?s like the fact there wasn?t a Doctor Who Sonic Screwdriver toy 28 years ago ? it?s ridiculous there hasn?t been one", said Moffat.

More on the guts of Doctor Who: The Adventure Series here.
Companies: BBC

ben mills 10 Apr 2010 16:55
1/3
I love it when people outside the industry tell us how to make games. Well if he has direction of this game i wish him well because i can't see it shifting units. Those "boring games" sell far more copies than people who watch his show. Just another reason why TV is FAR below games in the quest for rating/brand power.

Joji 12 Apr 2010 03:17
2/3
What do you expect from him, from a rival industry that's getting its ass kicked, while clinging to ancient business models.. He works for the BBC, and his Doctor Who show is lame. Why on earth he and the lame ass BBC, want to go toe dipping into games in beyond me. Not exactly what you want to see your tax payers money spent on, either.

Besides, he's wrong. Violence can be entertaining, and its inhumanly stupid to not give it some kind of positive outlet.

Do you have any statistics that support that assertion?

Because Modern Warfare 2 has sold around 3 milllion copies in the UK
9.8 Million people watched the Doctor Who season finale in 2008.

ben mills wrote:
Just another reason why TV is FAR below games in the quest for rating/brand power.

Do you have any statistics that support that assertion?

Without being able to support your firmly held, but dunder-headed opinions with actual facts, you do come across as someone with more of an attitude than a clue.