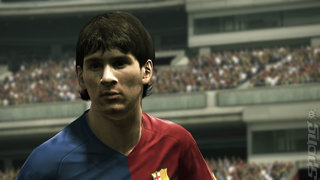 In classically un-footy language, we're informed that the DLC provides "additional updates to team rosters... ensuring that all recent moves by top players are fully implemented."

"The new content will also introduce the official match ball of this year's UEFA Champions League Final, which will be held in Madrid in May 2010. Putting fans right into the shoes of the pros, the Adidas F50i TUNiT boots worn by the game's cover star, Lionel Messi, will also be available."