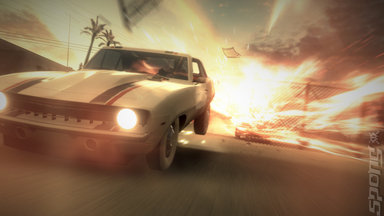 Apparently we all need Twitter in-game. Okay, there's an argument to be had that in-game Twitter is about as compelling as in-game being-boiled-alive, but Bizarre Creations has added it to Blur anyway.

Here's how it was announced, "We’ve been sitting on this one a little while, but the time is finally right to tell you all about it! We’ve been busy building full Twitter integration into our latest racing game, Blur. Not only will the game ship with a full complement of multiplayer (including online, system link, and 4-player splitscreen), but it’ll also ship with a whole bunch of cool social networky type features too!

"Here’s how it works: when playing the game, you can hit the Left Bumper at (almost) any time, and “Share” details of your profile to Twitter. This could be info on who you’ve just beaten in a race, which rank you’ve reached in the leaderboards, how many events you’ve completed, and a whole bunch more."