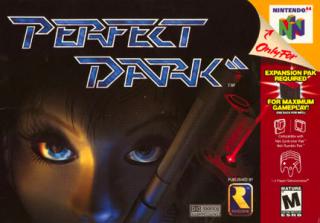 For those of you waiting for the Xbox Live Arcade re-release of Perfect Dark, you won't have to sit idle for long now - Microsoft has announced that Rare's 2000 classic will arrive on 17th March, costing 800 Microsoft Points.

The update of the Nintendo 64 original includes high-definition graphics and an online multiplayer. The classic multiplayer game expanded on everything that was great and good about its spiritual predecessor, Goldeneye 007, and many elements of the Combat Simulator are unmatched on a console to this day. Taking the fun of Skedar locations and FarSight shootings online will no doubt be a blast.

In other news, Microsoft also announced the date in which Game Room, it's virtual arcade, will be launched. 24th March for you, along with a price structure of 40MSP (per play) / 250MSP (either 360 or PC to keep) / 400 Points (360 and PC to keep).
Companies: Microsoft Rare
Games: Perfect Dark