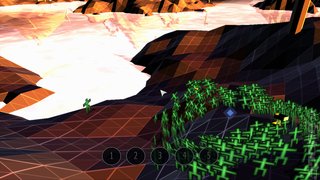 You control a bunch of flat digital creatures called Darwinians, whose survival is threatened by an evil virus bent of destroying their world. You have to train them to be combat-savvy, help them repopulate and ultimately destroy the virus.

Darwinia+ will cost you 1200 of your Microsoft Points.
Companies: Introversion
Games: Darwinia