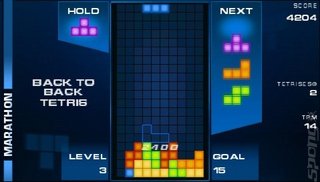 It's PlayStation Minis month at Sony Computer Entertainment Europe's official blog, and a comment from PSP Product Manager Adam Grant reveals that EA is to be making a PS3 version of Tetris.

The classic puzzle game is already on the Minis back catalogue, but while the latest PS3 firmware update allowed playback of Minis on the home console, Tetris was the only game that wasn't compatible with the feature. It appears we now have the reason why.

?EA are currently working on a PS3 version of Tetris that will take full advantage of the capabilities of the PS3 and provide the best experience,? said Grant in response to a comment on the PlayStation Blog. ?Look for this version to be available later this year.?
Companies: Electronic Arts
Games: Tetris