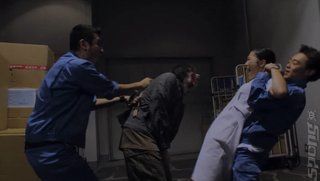 In a strange ironic twist, Dead Rising ? the Capcom game heavily influenced by the ridiculously good George Romero zombie films ? is getting a live action feature film, to be released later in the year on Xbox Live.

You can click here to go to the official website for the film, in where two brothers try to escape their newly-quarantined town that has fallen foul to a nasty zombie outbreak. It's being co-written and directed by Keiji Inafune, Dead Rising designer and Mega Man creator.

The trailer is definitely of Zone Horror quality, and features a range of shockingly bad set pieces and gratuitous violence. And that wheelchair! Make no mistake, this will be an amazing film. Watch it.
Companies: Capcom
Games: Dead Rising