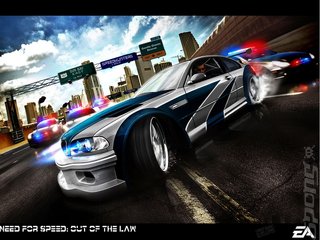 All Images (2) »
The mighty Criterion's take on Need for Speed is, if we are to believe Czech fansite Shift, to be called Need for Speed: Out of the Law.

The site even has some pictures that it claims come from the game, which isn't to be released until next year. It also mentions, "Centre of the action to be fictional Bay City Sun-with a real draft in San Francisco, and according to our observations during the rotation of the night and the weather had changed. Police services will be strengthened for a secret weapon - unmarked vehicle, probably mainly motorcycle patrols."