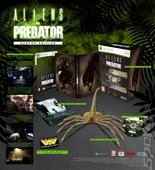 All Images (6) »
The Hunter Edition pack and goodies for Aliens vs Predator have been revealed in all its gory (sic). As announced just this week, the game is due out on February 19th 2010 in Europe.

The Hunter edition will contain "the standard edition of the game, Aliens vs Predator plus "the PDLC of four exclusive multiplayer maps, as well as a fully poseable facehugger model, a Weyland Yutani sleeve badge and a 3D lenticular postcard."

The Survivor Edition is "a steelbook version of the game and includes an unlock code for 4 exclusive multiplayer maps which will be available to download post-launch.
Companies: SEGA
Games: Aliens Vs. Predator