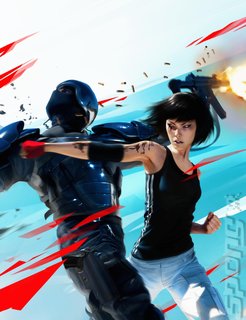 Looks like someone?s said something they shouldn?t have said. Kotaku is reporting that DICE?s Senior Lighting Artist, Oscar Carlén, made note of a Mirror?s Edge 2 on his online resume. Then, all of a sudden, the game title was removed.

Before being discovered and quickly edited out, Carlén?s CV stated that he is currently involved in two projects - one being Battlefield 3, an already-announced title, and the other being one Mirror?s Edge 2. Obviously, the whole incident took place before we were aware, so we only have the word of Kotaku and a spatter of other blogs to go by.

The original Mirror?s Edge in 2008 was applauded for its unique approach to the 3D platformer and was notable for its striking art style. Let?s hope that a sequel really is in the works, we could do with another dose of free-running.

If a sequel comes to pass though, Tim Langdell's going to have a field day.
Companies: DICE
People: Oscar Carlen
Games: Mirror's Edge