Image Fear: Scary Pixie Lott Sings to Herself in Simlish 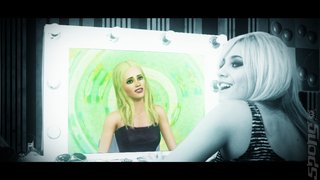 All Images (2) »
We don't know which one of these pix is more worrying: a pallid Pixie Lott singing to a rather perturbed Sim of herself or a frankly scary looking Pixie surrounded by Sims. Decide for yourself.

The blurb is: "British pop star and MTV Europe award-winner Pixie Lott today unveils a brand new virtual side to herself in her hot new music video. Working in partnership with number one PC game from Electronic Arts, The Sims 3 World Adventures*, Pixie Lott?s new video is a world first, which sees her perform her number one single ?Mama Do? in an English and Simlish duet (Simlish is the language the characters speak in the game)."

Got to be said though, neither is quite as naff as these although it's a close run thing.
Companies: Electronic Arts
Games: The Sims 3