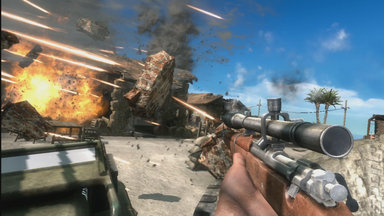 All Images (2) »
Electronic Arts has confirmed that Battlefield 1943 is due out via the PSN and Xbox Live next week.

If you didn't know, it's an FPS set in... actually, we won't insult your intelligence. It's developed by DICE (other Battlefield games, Mirror's Edge) and it's multiplayer focused.

Here's a nice touch, as stated by EA: "The Coral Sea map will be unlocked as part of a worldwide community challenge, where players will work together to reach 43million kills on both Xbox LIVE and the PlayStation Network. To help gamers reach that goal, up to 24 players can play together online in countless matches.

"They will have the freedom to compete by land, air and sea as either the US Marines or the Imperial Japanese Navy. Whether they choose to play the role of a rifleman crawling through the trenches, a steel-fisted tank commander, or a dog fighting ace pilot, gamers will have the power to rule the battlefield."
Companies: Electronic Arts
Games: Battlefield 1943