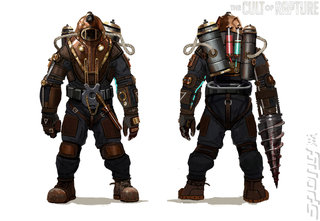 It's one of those tales that is all about the pix... however, says 2K Marin... "Between the first BioShock and the sequel, you've seen a lot of concept art for Big Daddies."

"The logic behind this concept art went beyond different designs and suit combinations. The artists had to imagine what the very first Big Daddy would have on him -- this Big Daddy had to feel like he was a rough draft or a work-in-progress, an amalgam of Big Daddies to come.

"The first Big Daddy was a test case, and in making the perfect prototype, 2K Marin drafted many, many prototypes themselves."