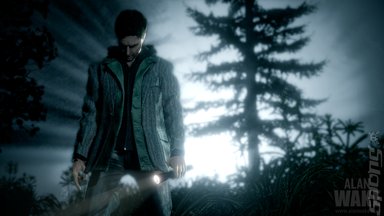 All Images (6) »
Microsoft and Remedy's mysterious survival horror, Alan Wake, got a bit of a showing off at E3. Joe SPOnG sat down to look at it and here, in brief, are his impressions as released to the world through SPOnG's Twitter page.

"In Alan Wake. Squeezed in with a "foreign" group so there will be translators. Fun.

"They can't stop the demo to translate, thank god. Demo is 20 minutes. Way more than at the press event.

"When you find a page it cuts to Alan reading. What was read happens almost immediately after he finishes reading. Nice plot device.

"Just revealed that light is how to hurt the dark enemies.

"Information is projected on walls. Not nearly as cool as Splinter Cell but nicely done.

"Enemies are locals that have been taken over by darkness. They are called "the taken"

"Machines and vehicles attack him and small objects are thrown by then darkness. Only bright lights can stop them.

"The light alone won't kill the taken you have to shine the flashlight to weaken them then shoot to kill them.

"Being chased by a crane, now driving. No loading or transition. Real slick. Now there's some sort of darkness tornado..."

That's the last we heard from him at the Alan Wake demo. We hope he's OK...

You can see the E3 screens released by Microsoft in the gallery.
Companies: Microsoft Remedy
Games: Alan Wake