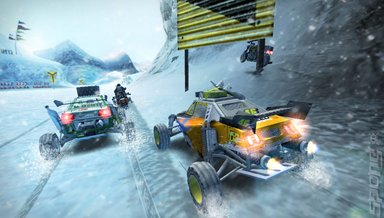 According to MotorStorm Arctic Edge's game director, Richard Ogden of BigBig Studios, there may be some connectivity between the PSP game and PS3 instalments of the series, such as Pacific Rift.

"Not got any real plans for that. There's not going to be any gameplay connectivity. You know, maybe something to do with unlocking some vehicles or something, but we're still looking at that, so we'll have to watch this space", said Ogden in a pre-E3 Q&A on PlayStation Blog.

Keeping with the vagueness of his earlier comment, Ogden added that there's "Nothing confirmed".

Asked about the possibility of Pursuit Force, a BigBig Studios-developed property that's previously had outings on the PSP and PS2, ever making it to the PS3, Ogden said, "Who knows if it will ever happen".

You can see the full Q&A below.