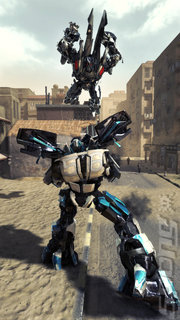 Activision has pinned down Hollywood voice talent from Transformers: Revenge of the Fallen for its game of the same name.

Topping the list are Mega(n) Fox and Shia LeBeouf, with Peter Cullen and Frank Welker, the voices of Optimus Prime (best voice ever?) and Megatron from the original animated series also signed on.