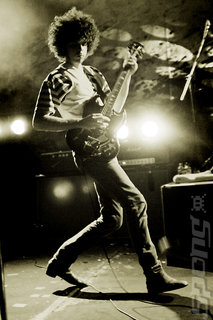 A stinker.
Activision (or Activision/Blizzard or BlizzyVision or whatever they're deciding to call themselves this week) has let the world know what 48 tracks will be included in Guitar Hero Greatest Hits. But first, the description of the game as presented by the highly-paid marketing executive team somewhere in the USA:

"...quintessential Guitar Hero game that allows players to join together and rock to the most fun-to-play songs, all available as master tracks. Players will fall in love with their favourite Guitar Hero music all over again as they rock to anthems from Guitar Hero, Guitar Hero II, Guitar Hero Encore: Rocks the 80s and Guitar Hero III: Legends of Rock, and enjoy them for the first time as a full band experience with updated note tracks for guitar and bass, as well as entirely new gameplay for the drum kit controller and microphone."

We were going to rip the living piss out of 'quintessential' but, what the hell, it works. And at least they didn't use 'experience'. Anyway, the tracks are below. There's some good stuff: More than a Feeling. There's some average stuff: Carry On Wayward Son; and there's some absolute stinkers: Wolfmother and Woman. Decide for yourself...