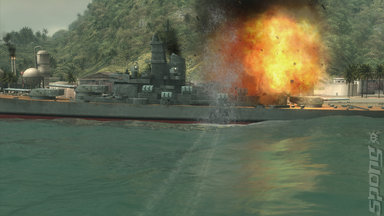 Eidos has dated the follow-up to Battlestations: Midway - Battlestations: Pacific for release in North America: it's May 12th. It's also coming out on May 15th in Europe and Australia.

Says Eidos, "players can take to the skies and seas through two massive, action-packed campaigns across 28 missions... An historically accurate US campaign puts players in command of the US Navy?s Pacific fleet through the Battles of Guadalcanal and on to Iwo Jima, Okinawa and victory. For the first time, Battlestations offers players a chance to rewrite history, playing through a Japanese campaign as the Imperial Japanese Navy from Pearl Harbor and on through Asia, Australia and beyond, expanding its empire throughout the Pacific rim."

The game is out for Xbox 360 and PS3.
Companies: Eidos
Games: Battlestations: Pacific