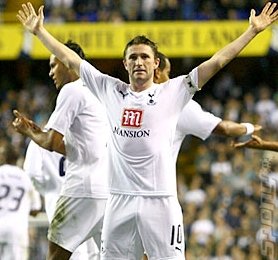 Robbie Keane illustrates how much he made in the transfer window. And how happy it made him.
Konami has followed yesterday's updated to "small technical issues within PES 2009" with its free update to the January transfers.

So, if you were worried that Robbie Keane was still at Liverpool, all you've got to do is get your copy of PES 2009 booted and get the download in-game. Apparently, "Hundreds of players have been updated and corrected according to their moves, with approximately 200 new players added to the game for the first time. The stats of thousands of players have also been refined, in line with their performances so far this season."

We like the idea of football players having "moves". In the case of many of them, however, those entail falling over a great deal or doing unmentionable things in nightclubs.
Companies: Konami
Games: Pro Evolution Soccer 2009