Dance, monkey girl Dance! The Sexy Ulala is to star in Space Channel 5 on the PS2! 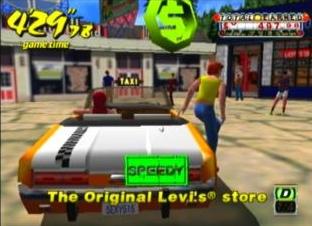 All Images (2) »
Sega has stated that intends to support both the PS2 and the Game Boy Advance. The first title to be ported to the powerful 128-bit Sony console will be Space Channel Five.

Space Channel Five is a futuristic dancing, rhythm game starring super sexy intergalactic reporter Ulala. The aim of the game is to free the citizens of the space station by making them dance and eliminating the evil mind-controlling aliens. If you have ever played Parappa the Rappa you will have a fair idea of what to expect from this dancing game.

Space Channel Five is a fun, addictive game that can be picked up and played by 90 percent of the population. It features amazing graphics and a top class soundtrack. It seems a slightly strange choice to be picked as the first game to be ported. Even though SP5 is a good game, there are better games like Shenmue or Virtua Tennis that would make a great first PS2 impression. Great games make a console and Sega?s support of the PlayStation 2 could prove extremely valuable.

Sega has announced even more games that will be ported to the PlayStation 2 following SP5. Space Channel Five might be the first game to make a debut on Sony?s console, but the good times are just starting.

In the pipeline there are several amazing titles just waiting to be converted. The highly original Crazy Taxi will soon be a PS2 title. In Crazy Taxi you must ferry your passengers to their destinations as quickly as possible. This isn?t any boring taxi sim, it?s possible to drive through shopping malls, leap over buildings and even drive under the ocean. The arcade style gameplay is fun and the game will look amazing on the PS2.

Additionally, 18 Wheeler Pro Trucker will hit the PlayStation 2 in the summer. In this game you race a rival trucker from one end of America to the other. Speeding down the freeway at a hundred miles an hour whilst avoiding tornadoes is a great laugh. Minute details right down to the fuzzy dice in the cab are replicated to increase the realistic look of the game.

Finally, the arcade game Zombie Revenge is also heading to the PlayStation 2. Zombie Revenge is similar to a modern day version of Streets of Rage but in completely 3D environment. Add massive bosses and two-player simultaneous gameplay and you?ve got a winner on your hands.