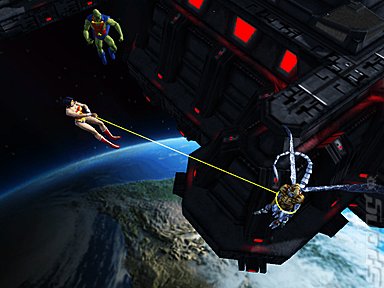 All Images (7) »
SPOnG has just been informed that Eidos has picked up the bound-to-be lucrative North American and European distribution rights for PlayStation 2, Xbox and PSP versions of the Justice League Heroes game, to be released Autumn/Fall 2006.

Eidos will market the game in Europe, while Warner Bros. Interactive Entertainment will oversee the marketing in North America.

You can see the first screens from Justice League Heroes right here. The game is of course based on the legendary DC Comics? superhero team and will appeal to 'Comic Book Guys' worldwide.

The obligatory bigwig quote for the press release comes straight from the mouth of Jason Hall, senior vice president for Warner Bros. Interactive Entertainment, who said, ?Justice League Heroes is an exciting game for so many audiences, and our focus is to present these super heroes on consoles and the PSP in the most compelling way for players? Partnering with Eidos, who has had much success in distribution, will allow the strongest reach for this action game where gamers take on the super powers of their favorite DC Comics? heroes.?

Well, we're duty bound to tell you that is what he said. It's highly likely that it was written for him by a PR minion. Either that, or he said something like it, but the minion wrote it down and made it sound more press release-friendly.

Random guesses about internal press release generation wranglings aside, Justice League Heroes is a major signing for Eidos, as Yummy Mummy Chief Exec of the London publisher Jane Cavanagh knows all too well, noting that, ?With the addition of Justice League Heroes to Eidos? portfolio of products, featuring Lara Croft and Agent 47, we are creating a formidable line-up for gamers that will now include playing as Superman, Batman and the other super heroes.?
Companies: Eidos Warner Brothers
Games: Justice League Heroes