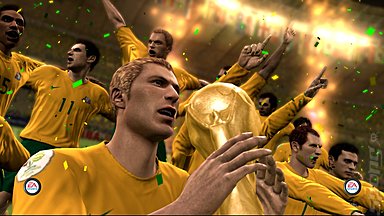 All Images (6) »
The feast of chocolate-y gluttony otherwise known as Easter is officially over this week, with the UK leisure software market down some 12% on units on last week. The only format that had a good week was Xbox 360, which benefitted hugely from the World Cup fever surrounding this week?s all formats number one entry - as supplied by ChartTrack - EA?s 2006 FIFA World Cup Germany.

EA?s aggressively marketed football title - over 33,000 units shifted last week - is a perfectly-timed release to exploit the growing pre-competition fervour surrounding anything and everything to do with this summer?s World Cup. FIFA knocks Lara off the top spot, with Tomb Raider: Legend dropping down to number two after three weeks at the summit.

The World Cup effect also boosted sales of SEGA?s Football Manager 2006, which is enjoying a late season surge, and is at number three in this week?s chart. SPOnG?s favourite DS title of the moment, Animal Crossing Wild World, is still shifting units, hanging in the top five, dropping just one place down to four.

Korean MMO specialists NCSoft gain an impressive foothold in the top ten this week, with Guild Wars: Factions in at seven. The game managed to sell nearly 10,000 units in its first week. Not too bad for an original IP, MMO title (i.e., one that is not Lord of the Rings or Star Wars or *insert your own choice of geek franchise here*).

Three more new releases manage to scuttle in to the back end of the Top 40, with Eidos Interactive's Rogue Trooper (based on the 2000AD-strip and - unsurprisingly - developed by Rebellion) in at 38; Nintendo?s Tetris DS in at 39; and Trauma Center: Under The Knife at 40. Both these DS titles will definitely be in SPOnG?s bag as we head out to E3 this weekend. We have yet to decide what else we are going to need to make the gruelling 14-hour journey a little more fun. Lashings of free lager and pies on the plane will hopefully help to take the edge off. All other suggestions below please.
Companies: Eidos Electronic Arts Nintendo SEGA Vivendi
Games: 2006 FIFA World Cup Animal Crossing: Wild World Football Manager 2006 Ice Age 2: The Meltdown Lara Croft Tomb Raider: Legend Rogue Trooper Tetris DS Trauma Center: Under the Knife