Plus new version on PS2, and more 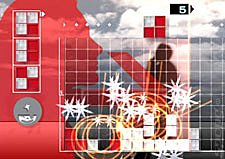 Following yesterday?s news about the appearance of Tetsuya Mizuguchi?s Lumines 2 at E3, it has been announced today that Buena Vista Games will be handling the publishing duties on Q Entertainment's music-puzzler, as well as Every Extend Extra for Sony's PSP, Lumines Plus for the PS2 and the intriguing Meteos: Disney Edition for the Nintendo DS. Not a bad little publishing deal for dead Uncle Walt?s burgeoning videogame empire. And it?s certainly given us much more of an impetus to spend some time with our friends at BVG at E3 next month. We are going to get that Mizuguchi interview if it kills us.

Every Extend Extra should also be a cracking little PSP title, and you might want to check out this link if you want to know more about the free-to-download original for PC. More than anything, we love the English disclaimer at the top of the page, which merely states, ?This site is written in Japanese. Sorry.?

Lumines Plus is clearly a new version of the original Lumines title on PS2. And perhaps the less said about Meteos: Disney Edition the better. Although, purely because it is a new Meteos, we are intrigued enough to want to have a look at it at E3.