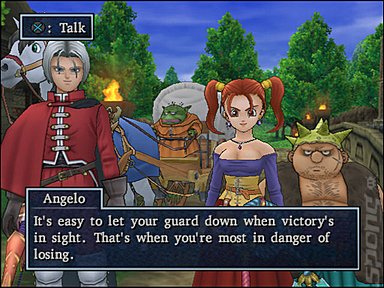 All Images (2) »
Square Enix has just announced its E3 line-up, apart from a few ‘special’ exceptions which will no doubt be revealed to SPOnG at its special press briefing event in LA on Monday, May 8.

Back to those confirmed announcements then, and perhaps the most interesting news is that Square Enix’s hugely successful Final Fantasy and Dragon Quest will both be making their Nintendo DS debuts at this year’s E3.

A playable demo of Final Fantasy DS will be available on the showfloor and the game will be shipping this
year. The game is described as “legendary” by the Japanese fanbase, and we are told that it will use the features of the Nintendo DS to their fullest and feature graphics that have been reworked and remodelled in 3D, whilst maintaining the essential Final Fantasy look and feel.

Square Enix’s President and CEO John Yamamoto said of the announcements: “Square Enix’s E3 line-up is our most diverse ever. We’re evolving and growing. Our goal is to provide the most engaging entertainment experiences. At E3 we hope to give everyone a glimpse into that future.”

Following is the ‘partial list’ of console and handheld games to be shown at E3 that Square Enix have released to date:

Dawn of Mana™, the first true Mana sequel in a decade, reveals the origins of the legend behind the Mana Tree and the Sword of Mana™. Breaking the series’ 2D mould, Dawn of Mana brings the world of Mana to three-dimensional life while preserving the atmosphere that fans have come to know and love. Players can see for themselves how vividly characters and monsters move about these new yet familiar surroundings. This instalment of the Mana is a true action-adventure, with sweeping plains and mountains stretching as far as the eye can see. It’s a world ripe for adventure!
A World of Sensation & “Touch” is the theme of Dawn of Mana’s world. You can virtually feel realistically rendered, lifelike objects.

DIRGE OF CERBERUS - FINAL FANTASY VII;Three years after the events of FINAL FANTASY® VII, an unknown group of seemingly unstoppable soldiers appears, bringing a swift and bitter end to the peace enjoyed by the people of the world. The members of this enigmatic group are the ones who were trapped under the ruins of Midgar for three long years-the Deepground soldiers. Vincent Valentine finds himself pursued by several elite members of the mysterious Deepground organization. An unrelenting chain of events leads Vincent to the truth behind his past-and forces him once again to be the key player in a battle for the planet itself and all those living on it.

Just what is the connection between Vincent's past and the recent attacks? When the world is engulfed in darkness, his gun will toll a dreadful dirge…

FINAL FANTASY XII;As war looms on the horizon, the mighty Archadian Empire begins a campaign to subjugate its neighbours. The small kingdom of Dalmasca shares their fate, and it is here that our tale begins.

Two years after the fall of Dalmasca, the citizens are without guidance and direction. In the capital city of Rabanastre, the denizens gather and await the introduction of Archadia’s new consul. To Vaan, a young man living on the streets of Rabanastre, the Empire is a hated enemy who took the life of his brother, the only family he had left. In an effort to exact revenge, Vaan hatches a plot to break into the palace and steal from the occupying imperials. There, he gets more than he bargained for as he runs into Princess Ashe, the sole surviving heir to the Dalmascan throne. Together, the two will embark on an incredible journey through Ivalice, tracing the mysteries behind the Archadian Empire’s invasion. The choices they make will determine the very fate of the world.

An All-New Combat System;Characters act according to an intricate “gambit” system of actions and reactions that you determine. As they fight, characters earn license points that can be spent to broaden their knowledge of magic, arms and armour.

VALKYRIE PROFILE 2: SILMERIA;Hundreds of years before Lenneth’s tale, another saga lies concealed by the gods. The valkyrie Silmeria once served Odin loyally, but after an incident ignited a conflict between them, Odin forcefully reincarnated her as a human. The human soul that would carry her spirit was that of Alicia, Princess of Dipan. Ordinarily, Silmeria’s consciousness would have been sealed, her spirit dormant until she was next summoned… However, the forced transmigration causes Silmeria’s spirit to awaken within Alicia, leaving two souls to inhabit a single body. The spirit that should have been sealed has awakened-a situation Odin will not ignore for long.

Photon Action System;This instalment introduces the new Photon Action System to the classic side-scrolling action format found in the original. Projecting photons grants players more freedom to explore and expands the action, resulting in challenging puzzles with clever solutions. Add to that “sealstones” that affect the laws of nature in dungeons, launching strategy to new heights.

FINAL FANTASY XI: Treasures of Aht Urhgan; The once sleepy port town of Mhaura has become the centre of unprecedented commotion. The cause of this disturbance can be attributed to the arrival of mercenary recruiters from the Aht Urhgan Empire, a land far to the east of Windurst. Starting in the city of the Tarutaru, they have been touting the benefits of their Empire-sanctioned business throughout Vana'diel® in an effort to garner the interest of prospective candidates, and also seek to organize a ferry route from Mhaura to the Imperial capital of Al Zahbi. The majority of the conservative townspeople frown upon the insistence of their foreign visitors. However, the large number of action-starved Mithran mercenaries is putting pressure on the governor, who is gradually losing her resolve to refuse entry to the Empire's ships.

Why is the Empress so desperate to recruit mercenaries? What trouble is brewing in the Near Eastern land of Aht Urhgan? The road to epic new adventures will soon be revealed...

FINAL FANTASY XI and the brand new third expansion, Treasures of Aht Urhgan™ are available now on Windows ® and Xbox 360™ video game and entertainment system from Microsoft. For more information on FINAL FANTASY XI and all of its expansions please visit: http://www.playonline.com/ff11eu

The magic of the FINAL FANTASY classics is returning to gamers’ hands-and soon the wait will be over.

Children of Mana; In ages past, an island called Illusia floated at the centre of the world. At the heart of the island towered an ancient, enormous tree that stretched up to the very heavens. For ages past, chaos and sorrow had engulfed the world until at last its salvation appeared in the form of a boy, a girl, and a holy sword.

Time flowed on and peace returned. The sword and the tree remained, and they soon came to be known as the Sword of Mana and the Mana Tree. Followers of the Mana Tree returned to Illusia as the world started slowly but surely down the path to recovery.

More Magic with the Eight Spirits; The eight elemental spirits are a staple of the Mana series. These powerful allies aid you with healing and special status effects. They can also unleash fearsome magic upon your foes.

Cooperative or Competitive Gameplay for Up to Four Players; The greatest innovation of this installment of the Mana series is allowing four players to advance the story and solve quests together while maintaining the feel of an action RPG. Players' actions affect each other in a gameplay experience completely unlike previous action RPGS!

DRAGON QUEST HEROES: ROCKET SLIME; The latest game from the creative minds behind the RPG classic, Dragon Quest™: The Journey of the Cursed King™ has arrived on the Nintendo DS. The hero of this brand-new action-adventure is a slime-one of the most popular monsters from the Dragon Quest series. The game is set in the kingdom of Slimenia, a peaceful land that is suddenly invaded by a mysterious cartel called “the Plob,” who then proceed to kidnap all the slimes in the capital city of Boingburg. Our protagonist, Rocket, is the only slime left behind, and must embark on a journey throughout Slimenia to save his friends and uncover the Plob’s nefarious plot!

Bounce, Stretch, and Carry; The adventure stages consist of our hero bouncing and stretching, as well as carrying various objects on his head, while solving the mysteries behind each area, and rescuing his captured slime friends along the way. Simple, streamlined controls allow players of all ages and skill levels to take part in the action with ease.

Fierce Tank Battles;Each adventure stage culminates in Rocket hopping aboard a colossal slime-shaped war machine called the Schleiman [Tank and battling it out with the enemy’s Monster Tanks. Customize tanks by collecting a vast array of weapons and items. Call upon allies, each with their own individual personality and abilities, to aid in the heated tank battles. Even shoot your fellow slimes so they can infiltrate and sabotage the enemy’s Monster Tank! Pit tanks against a friend’s in exciting player-vs.-player action, using the Nintendo DS wireless multiplayer game feature!

This is the fans’ chance to complete the circle. The legend of FINAL FANTASY III is reborn.

VALKYRIE PROFILE: LENNETH; Asgard, the realm of the gods, remains locked in an eternal struggle between the benevolent Aesir and the demonic Vanir. With the end of the world approaching, Odin, Lord of Asgard, summons Lenneth Valkyrie to his side. Possessing the ability to hear the thoughts and feelings of men and women in their dying moments, he charges Valkyrie to search Midgard, the world of mortals, to recruit and train the souls of worthy warriors to join the ranks of the Aesir in the Sacred War. VALKYRIE PROFILE®: LENNETH brings the classic PlayStation® game console title, originally released in 2000, to the PSP system with completely new CG cut scenes. tri-Ace, the developers behind the acclaimed Star Ocean® series and Radiata Stories™, introduce new fans to the spectacular combo attacks, unique side-scrolling environment, and gripping storyline that first captivated players six years ago.

Additional CG Cutscenes; To give players a deeper understanding of the plot and to complement the game’s dramatic storyline, additional CG cutscenes have been incorporated. Some of these new scenes contain links to the story of VALKYRIE PROFILE 2: SILMERIA.
Companies: Square Enix
Games: Dirge of Cerberus: Final Fantasy VII Dragon Quest: The Journey of the Cursed King Final Fantasy XI Online