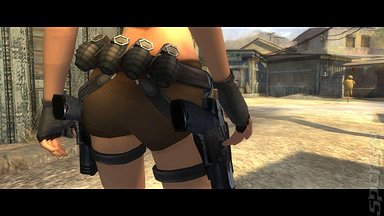 All Images (5) »
It's been a good week for the UK games industry, the Easter weekend contributing to an overall 17% increase in game sales on last week, with all formats (except 360) benefitting due to the boost in holiday spending.

There are no real surprises at the top of the All Formats chart as supplied by ChartTrack, with Eidos Interactive’s Tomb Raider: Legend selling well, shifting nearly 90,000 units in its second week on the shelves. Deservedly so, say we, as Legend really is a return to form for the series. You can see SPOnG’s full review of Tomb Raider: Legend here.

Creeping up the charts to number two this week is VU Games’ Ice Age 2: The Meltdown, no doubt boosted by the heavily-marketed release of the movie. EA’s FIFA Street 2 hold onto third spot this week, whilst the same publisher’s The Godfather slips a couple of places down to four.

The PSP and 360 versions of SEGA/Sports Interactive’s definitive Football Management sim, Football Manager 2006, take the title back into the top ten this week, straight in at five. With just seven weeks to go until the World Cup, this game should sell steadily throughout the summer, and with the release of Sensible Soccer from Codemasters in May, gamers are going to be well looked after with two of the best management and arcade soccer games yet known to man.

Holding firm at six, with steady sales over the Easter hols, is another SPOnG favourite - Nintendo’s Animal Crossing: Wild World. Party game Buzz! The Big Quiz also had a successful Easter, up one place to seven, while Ubisoft’s King Kong: Official Game of the Movie clambers back up from 15 up to eight. SPOnG suspects the marketing overload surrounding the DVD movie release plays a large part in this.

Tom Clancy’s Ghost Recon: Advanced Warfighter (GRAW) slips four places, still hanging in at the bottom end of the top ten at nine, while the 360 release of EA’s Battlefield 2: Modern Combat pushes that title back up into the top ten.